Jack Laugher: One year on from Gold Coast 2018

Laugher, from Harrogate, struggled with an ankle injury in the build-up to the Gold Coast, but battled through and showed his usual resilience and incredible talent to bring home a total of three gold medals at the 2018 Commonwealth Games.

Laugher said: “I have competed in 3 Commonwealth Games now and the Gold Coast was a special place, so I was happy with how I did and everything worked out perfectly.

“This Commonwealth Games was no different, apart from the fact that I only had around two weeks training in advance due to an ankle operation, so I had to be careful but really wanted to win.

The 24-year-old, who is based at City of Leeds Diving Club, found it a nervous experience trying out an unfamiliar event in the 1m springboard in a different competition environment but clearly prevailed taking home the gold.

He added: “The first day of events in diving was really scary because it was the 1m event which I don’t’ really compete in that often and to make things worse I was the first diver to go so I was the kicking the Commonwealth Games off for diving.

“Being outdoors in Australia, a completely different facility and dealing with wind, sun and rain was nerve-wracking. Luckily on the day the temperature was nice, weather was good and I somehow managed to get myself in a great place and get that gold medal.

“At the start I was really nervous. But I went through my normal routine, had a big breakfast, chatted to my coach, keep it all light and fun through the day and enjoy myself.”

Laugher also stresses the importance of staying calm during competition, not letting the pressure get to you and his routine before his dives. Normally, you would expect being in a strong place going into the last dive to be a reassuring situation, but Laugher believes it actually adds to the pressure.

“Having the chance to win the gold medal so easily in my last dive was actually really nerve-wracking because I knew that all I needed to do was an okay dive. I was trying to think about getting the best performance, and putting on a great show for everybody. It was so important to me to win the gold for Team England at the Commonwealth Games.

“When I am on the board I am very tranquil, almost as if there is no voice in head, just me and it helps me clear my head and become at one with the diving to focus on what I needed to do.” 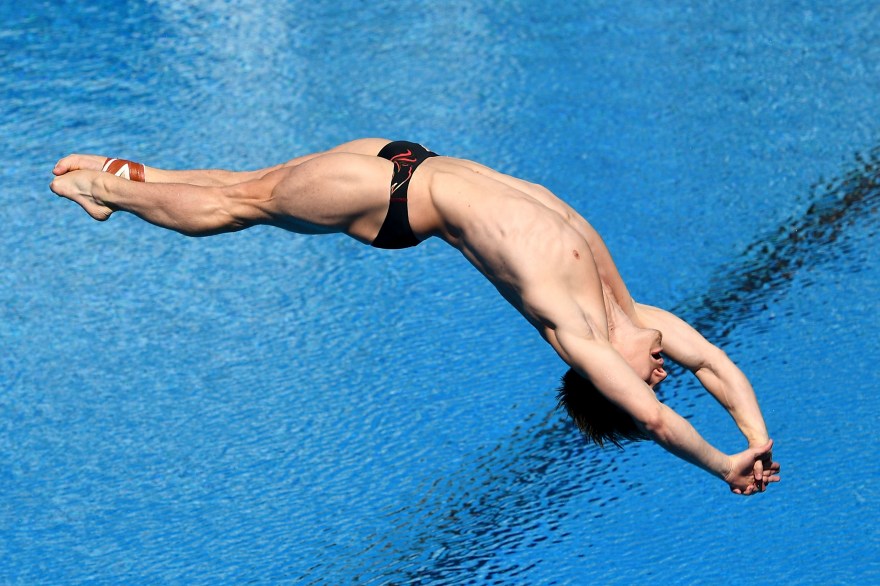